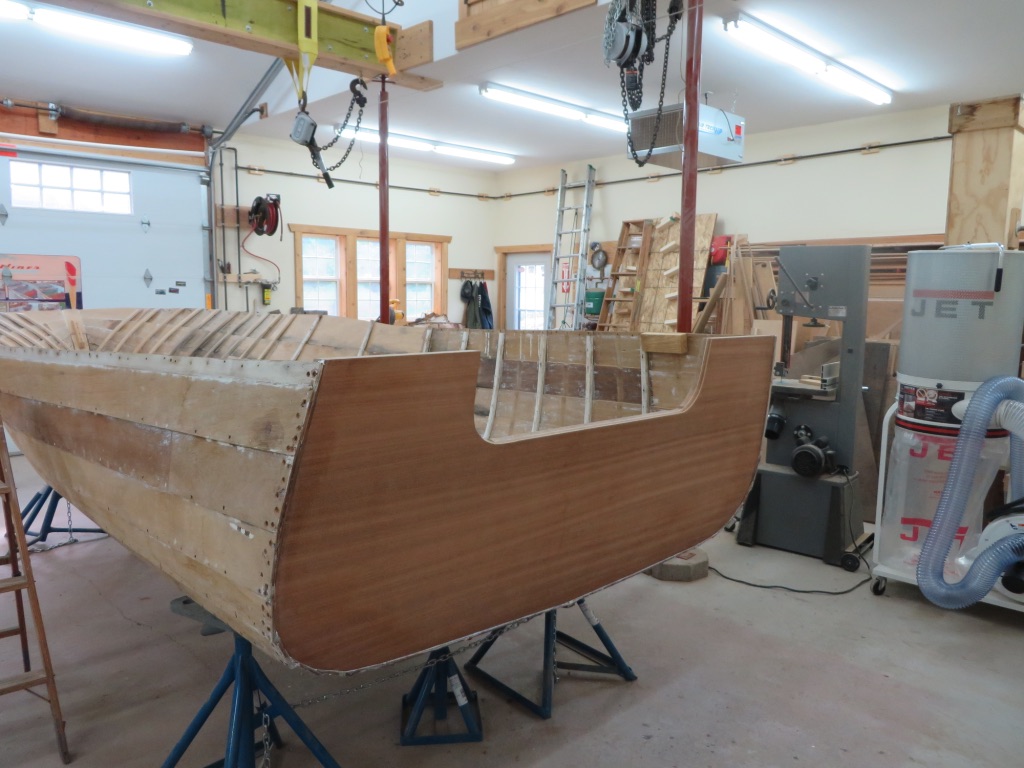 The original transom, was in good enough shape to repair. There was rot on the inside along the port side bottom edge that could have been repaired with a dutchman. The original transom had been finished with paint, inside and out. The owner wants the original vinyl covered deck replaced with a double planked mahogany deck, and the rotted white oak gunwales replaced with mahogany. Having a bright finished mahogany transom would compliment that work. Stripping paint from the original transom revealed that it was mahogany veneered, but there were many holes in it from mounting various fittings over the years. So we opted to replace it.

The original transom was constructed of two pieces of ¾" mahogany veneered marine plywood laminated together along with a ¾" plywood cheeks mounted on each side of the inside of the boat and a ¾" plywood bow along the bottom of the inside. It was this bow and a portion of the cheek that had rotted on the port side. I cleaned it up to learn the extent of the damage before we had decided to replace it.  The transom was fastened to the boat with glue and screws along the plank ends. There was only one screw that held it to the keelson (on the top). Curiously absent were transom knees. And there was a notable, unacceptable, ¼" gap between bottom bow of the transom and the keelson. This would have to be corrected with the new transom.

I began by making a template of the outside edge of the transom by taping a sheet of clear mylar over it and tracing the outline.  I transferred that outline to a piece of "doorskin" plywood (1/8" thick Luan plywood) and cut out the shape to create a template.  Next I took measurement of the various angles where the transom joins the lapstrakes and the bottom  (1º for the sides, 5º for the transition to the bottom, 10º for the bottom). With the completed template I constructed a new transom from a nice piece of ¾" ribbon stripped Sapele Mahogany marine mahogany plywood (for the outside) and a piece of ¾" Okoume marine plywood (for the inside) and laminated them together.  Then I shaped the edges for the proper bevels where they join the planks and the bottom. Then I mounted the cheeks and bow, substituting the plywood for white oak, and beveled their edges as appropriate with a block plane. 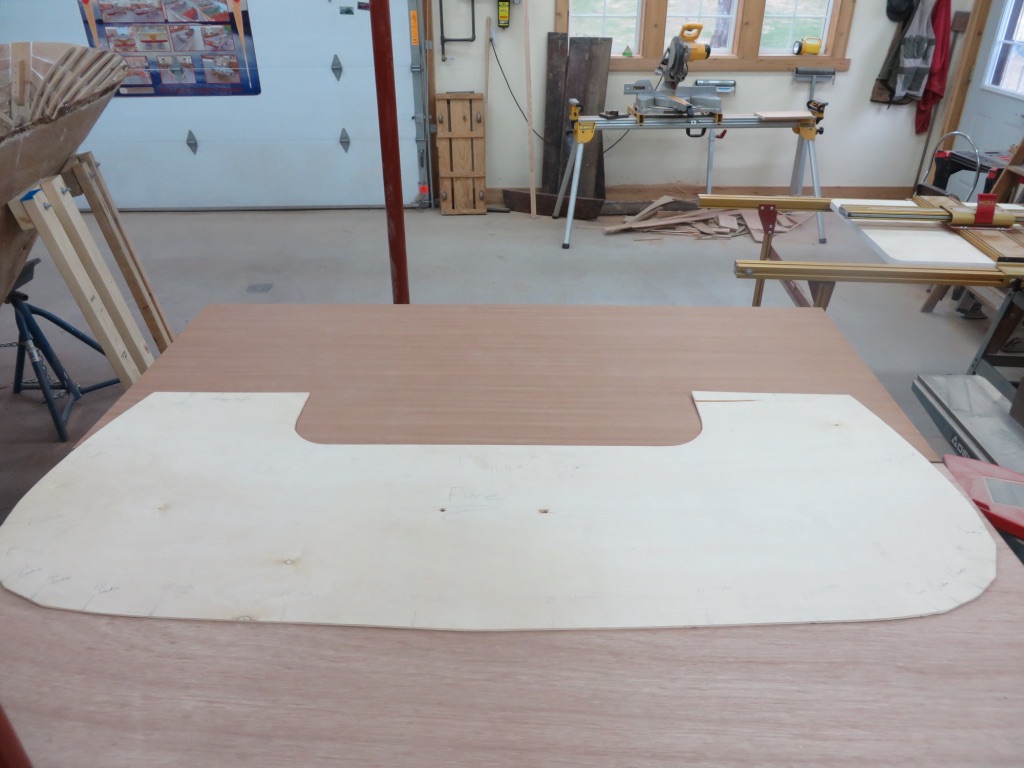 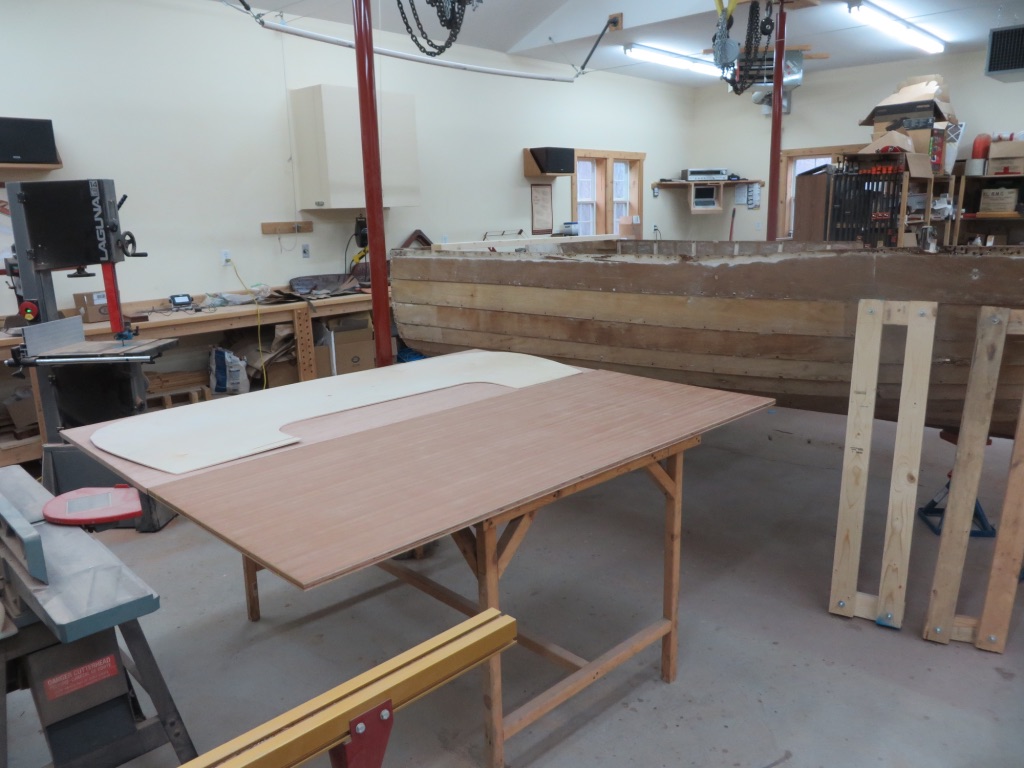 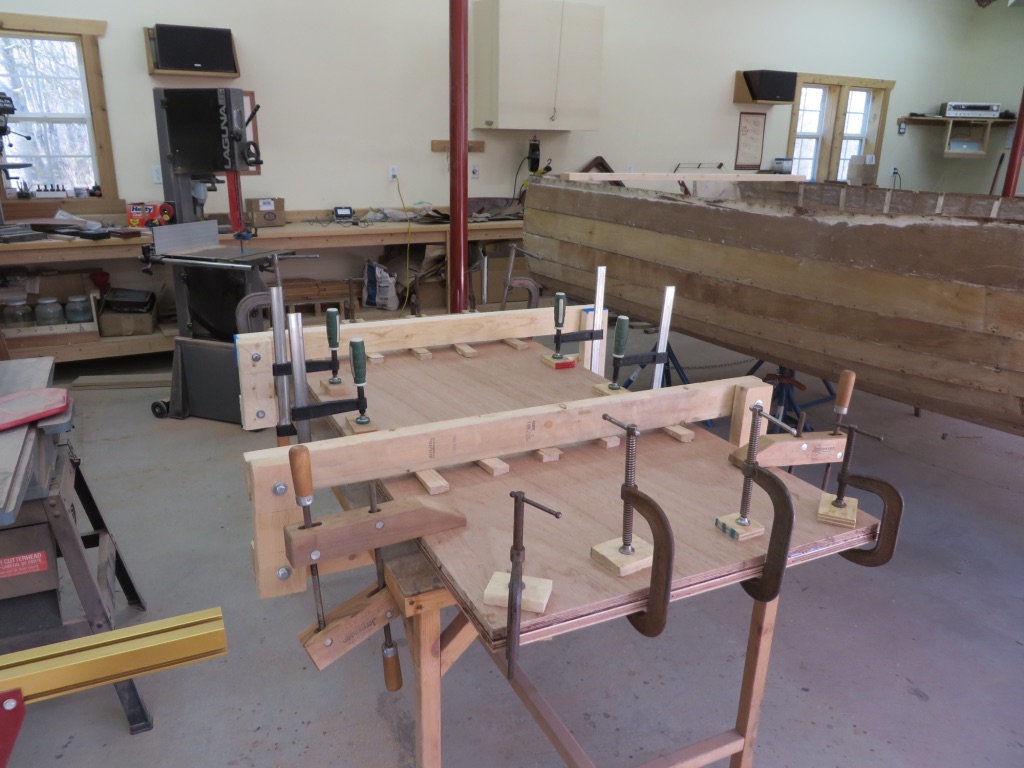 With the new transom constructed, it was time to commit and remove the old transom. With this came the final unexpected surprise (I thought I had already learned all the repair issues for this boat)! I began be removing all the screws that held it in place along the planks and the bottom. It was also glued in place which introduced the challenge of removing it without damaging the planks and bottom. I cut out the remaining material with a sawzall, cutting as close as I could to the glue line with out damaging the planks, bottom or keelson. With the majority of the transom now removed, I cut out the remaining material, in small pieces, using a multi-tool outfitted with a scraper blade to break through and melt the glue line.  I also used a hand-saw to remove it in small sections. With that the transom was out with minimal damage to the planks. What little damage there was I repaired by replacing the damaged plywood veneer with thick 1/16" mahogany veneer and epoxing and then sanding it flush to the plywood's surface.

With the transom out, the final surprise was revealed. On close inspection of the bottom, directly under the keelson, it became clear to see that what I initially thought may have been a design feature similar to the "Simmons Hook", was actually damage possibly caused by either a sagging transom, or perhaps an incorrectly installed keelson. My first thought was that it had sagged under the weight of the 90HP Mercury outboard motor that had been mounted on it for so many years. It was clear to see that the bottom had pulled away from keelson, as there were a couple of protruding screws on the bottom of the keelson, and there was evidence that the bottom had pulled away because you could see the tear-out evidence from where the screws once fastened the bottom to the keelson. While this clearly showed the transom had sagged, I found it perplexing because in viewing the stern of the boat at the transom, it appeared fairly level to my eye (I used a level too)... there was no evidence of a sagging transom when viewed from the side (note that the sag forms only from the last 10" of the keelson so I was expecting to see a similar sag along the last 10" of the side planks).  You could only see evidence of a sag on the bottom.

So I was faced with a decision on how to repair this issue. Was it really sagging because, again, the boats stern-end appeared fine when viewed from the side? I cut out the protruding fasteners and clamped the bottom to the keelson which resulted in an upside-down arch shape along the bottom edge... unacceptable. To eliminate the upside-down arch shape I would have to unfasten the lapstrake planks, where they transition from side-to-bottom, and reshape them.... a rather lengthy and involved process. Besides, they looked perfectly fine and fair now. I continued to puzzle as to why the boat's stern-end sides were level but the bottom sagged. Could the boat's stern-end have been originally shaped upward and sagged to be level?  Could the transom had not been shaped properly at the time of construction? Did the keelson curl up (it is perfectly flat and level at present)... perhaps it was the keelson the lifted up and away instead of the bottom sagging?

To me the transom seemed not to have been reinforced adequately. There was a ¼" gap between the keelson and the transom with just one screw holding them together, through the gap... complexly inadequate. And there was no transom knees for reinforcement. Was something there but had been removed in the past?  Perhaps, at the time of manufacture, the keelson was cut ¼" too short and forced down against the transom and fastened with the one single screw.  And over time, the screw failed and the keelson lifted back up to its natural shape pulling away from the bottom... this is the theory that makes that seems most likely to me but could that white oak keelson have been pulled down that far?  It explains the ¼" gap, the keelson being pulled away from the bottom, and the lack of a sag in the side lapstrakes.

I gave this some thought over a few days and decided to let it be where it wanted to be, and reinforce it, as is, the best I could. Otherwise there would be significant time and work involved to correct this, and I couldn't be sure as to how and why it sagged. And perhaps leaving the "hook" in would be an improvement as it is part of the design of the Simmons Sea Skiff bottom referred to as the "Simmons' Hook" to improve planing and reduce porpoising.

Apprehensively I moved forward and repaired the bottom tear-out by removing the loose tear-out material, filled it with epoxy thickened with colloidal silica, and then covered it with a small piece of fiberglass cloth. I then cut off the protruding  screw heads. Next I cutout a wedge-shaped piece of white oak to fit the gap, leaving a small limbar hole at the end (for bilge water drainage), and glued it in place with 3M 5200 Sealant/Adhesive. I'll add a few screws later when I flip the boat over and prep it for paint. Lastly I cut back the keelson a bit to allow for a 1" piece or white oak to fit snuggly between the keelson and the transom adding some reinforcement. 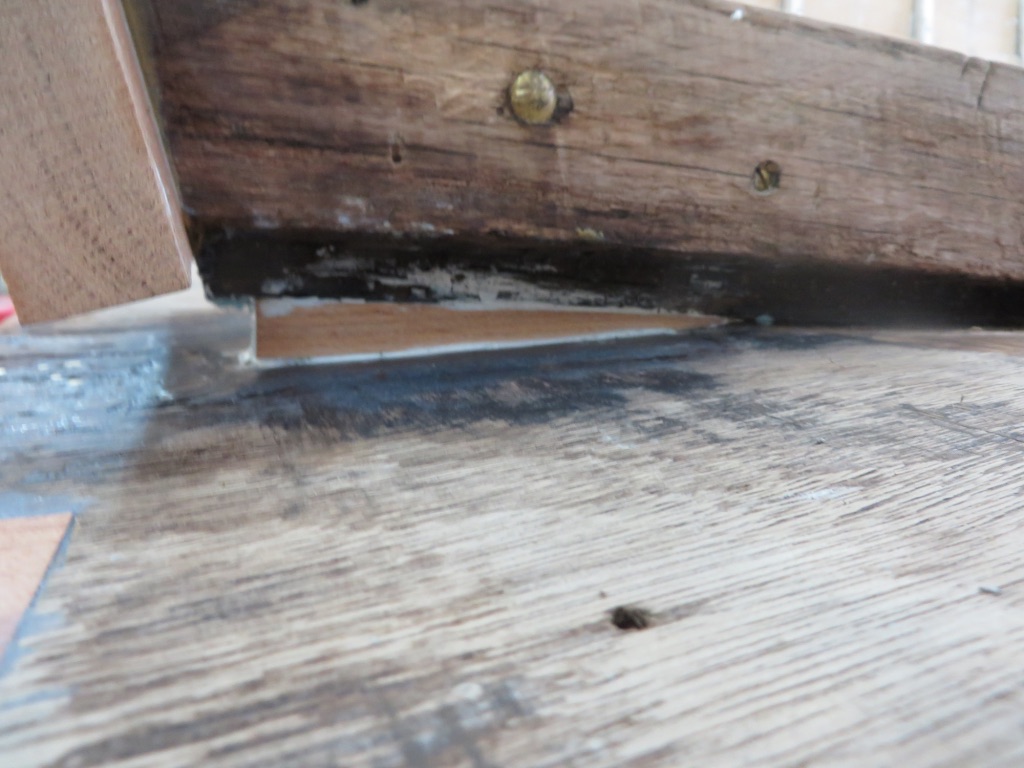 Finally it was time to mount the new transom. This went very smoothly. It involved simply applying some 3M 5200 Sealant/Adhesive, positioning the new transom into place, and fastening it in place with silicon bronze wood screws. 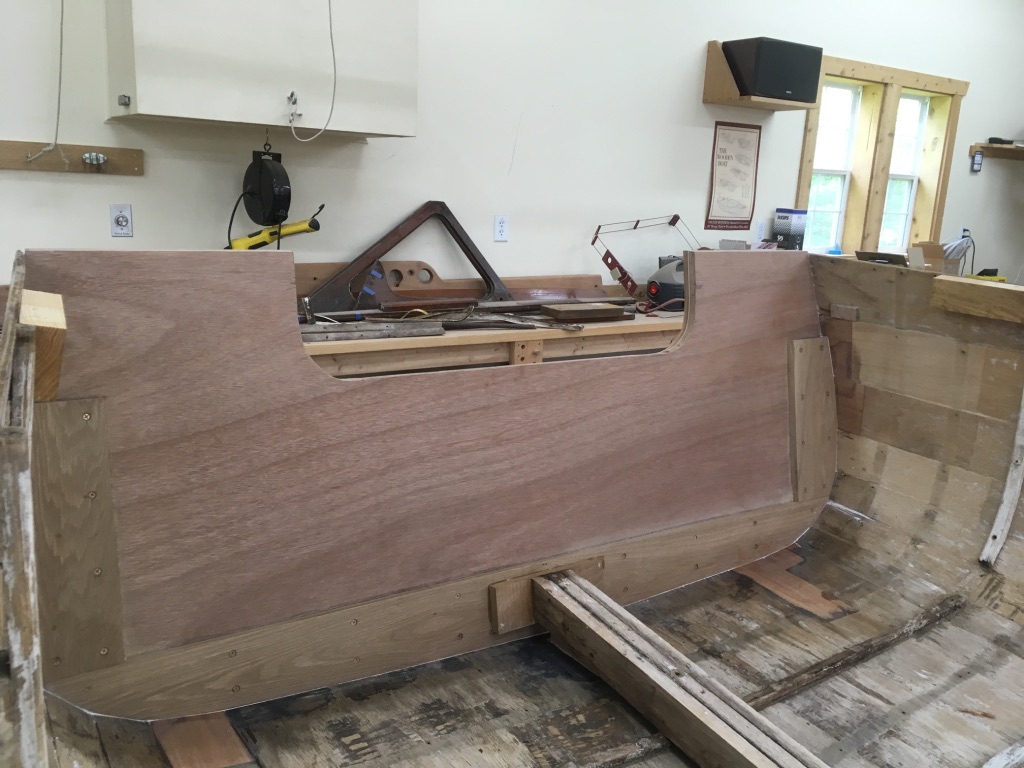 It is shaped exactly as the old transom and looks great from every angle except from the bottom where the sag is clearly apparent. With the addition of the piece of oak joining the transom bow to the keelson it is a bit stronger than the original.  However, the origin of this sag remains a mystery to me and, hopefully, leaving the sag as I found it was not a mistake.