I began with the bottom frame member on the front of the windshield. The challenge with this piece was to scribe in the crown of the deck as well as beveling the bottom edge to the correct angle. The process involved making a template to capture the deck’s crown and tracing it onto the bottom edge of the new bottom frame. The original center post was used to establish the correct angle of the bottom edge. Then the frame was shaped using a spokeshave.  It was important to maintain an equal width at both ends so to keep the windshield level and square.

With the most crucial piece of the windshield properly shaped, next was the side windows. There were a number of  challenges in making these window frames. The first was to keep the angle of the front frame member aligned with the angle of the bottom frame of the front of the windshield. The next challenge was scribing the bottom frame member of the side window to the s-curve of the covering boards it would set on. And third, rabbeting and slotting the inside of the frame to accept glass and a window seal.

Next the new side frame was constructed of three pieces of mahogany shiplap jointed together and sized to the largest overall dimensions.

Next was cutting out the rabbet and window seal slot for the glass panel to fit in.  The glass template was used to trace the shape of the glass onto the frame. The template was sized about ⅛” larger than the actual glass panel. The frame was then cut and shaped to the form of the glass panel using a hand plane, spokeshave and a drum sander. The slot used to secure the window molding was a very tight ⅛”by ⅛” located just ⅛” from the edge of the rabbit.

The last step for the side window frames was was cutting and shaping the bottom scribe and mounting them to the deck. 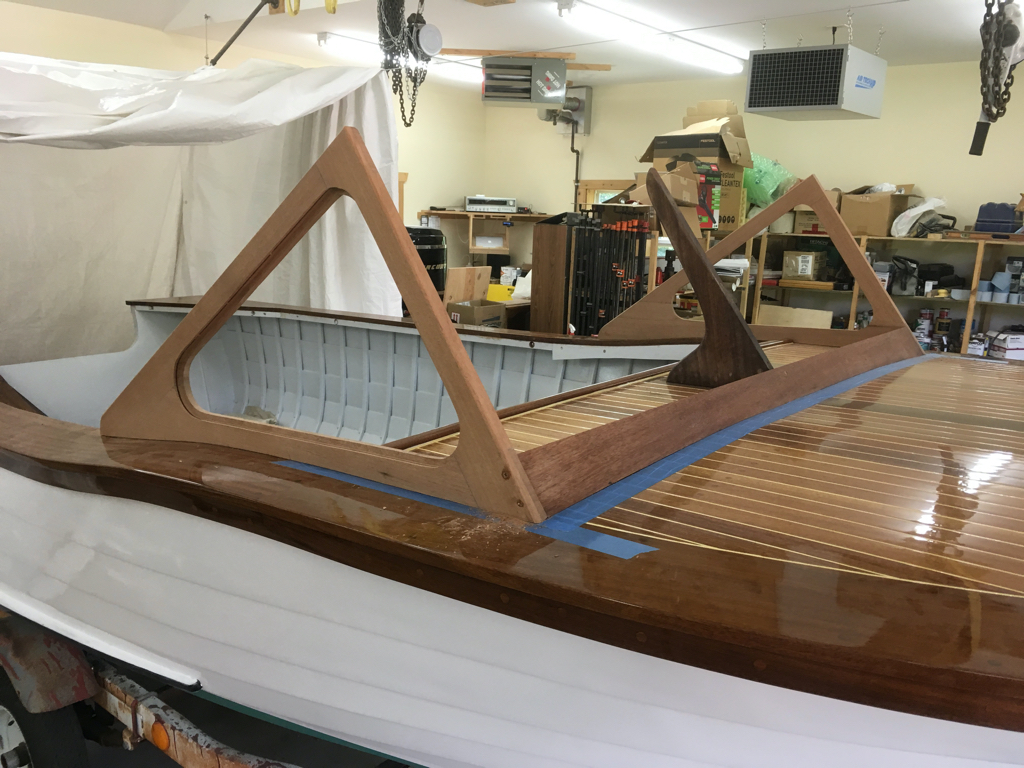 Building the rest of the windshield frame was straightforward.  Just needed to mount the top frame, center pillar, and the top visor.  Once those pieces were added the original front glass panels and their aluminum frames were remounted along with the original hardware to open and close them.

The last thing to do was mount the original side window glass panels into the the new side window frames. After much searching online I found a suitable window seal at a Lyman Boat restoration website. They call it “old style 1-Part Windshield Molding”. To install it took a little bit of work. I found that spraying Windex on the glass for lubrication and using the circular part of a wrench I was able to mount it in place with a little bit of carefully applied force.