Wow, two months have gone by since my last post... very busy summer with many events... a trip to Boston, the Wooden Boat show at Mystic Seaport, two family weddings, birth of my grandson, repairing the roof of my house... all of which took time away from this project. But I'm back on it full-time now.

Latest work has included scraping and scrubbing out all the sludge from the bilge (yuck!), scraping loose paint, stripping varnish and paint, and sanding. Very laborious, tedious, dull, and time consuming work... but necessary. Eighty percent of a proper refinish project is the preparation work.

With the completion of this phase, the true condition of the boat was revealed along with an undesired surprise.

My main concern with this boat from the beginning was the bottom.  With the inside now cleaned up, numerous past repairs have been revealed. As best as I can ascertain, long ago it appears the bottom began to check (common problem with fir marine plywood) and an epoxy penetrating sealer was most likely applied to address it. That appears to have stopped quite a bit of the checking. However it appears that in a few areas the checking turned to rot that was later repaired with fiberglass cloth and epoxy (look for the shiny spots along the bottom in the picture). I counted six such repairs to the bottom. One such repair in particular really concerned me.  It was located amidships on the starboard side close the chine.  A couple of layers of veneer had been sanded down leaving less than ¼" of thickness to the plywood bottom and what remained was then covered with fiberglass cloth and epoxy. Since those repairs were last made, additional checking and rotting on the bottom has occurred and there are a few soft spots here and there. So the condition of the bottom is fair at best and we have decided to replace the bottom. A new bottom is now planned using ½" Meranti marine grade plywood.

The surprise was the transom. It initially appeared sound and I had no concerns about it. However, after I removed the fuel tank from the rear of the boat the inside of the transom was revealed. 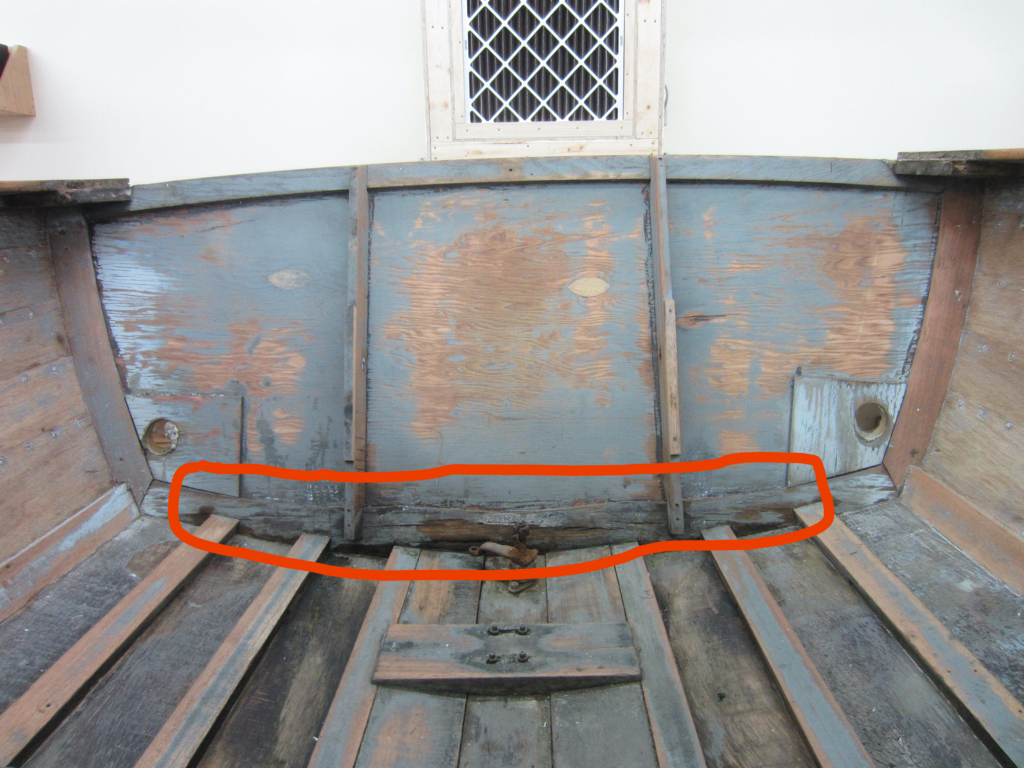 The lower transom bow (the transom bows frame the top and bottom of the transom) caught my immediate attention as it has rotted. The question was how bad was the rot and had it spread into the plywood transom. Sanding the finish off the outside of the transom revealed that not only that it did rot through to the transom, but sometime in the past somebody had repaired it with an auto body filler. BONDO!

So the plan has also been amended to include a replacing the transom.