This week I completed stripping down the interior. All deck fittings, registration lettering, the rear seat, the console, the engine cover/seat, the floor panels (soles), and the vinyl from the stern deck were removed as was the rub rails.

Removing the console was a bit involved.  I removed the instrument gauges, switches, fuse panel (just a piece of thin plywood holding two fuses), and compass from the console.   The throttle and steering cables were removed too. I took photos of the wiring of the instrument panel and labeled all electrical connections.  The instrument gauge panel was sent to Kocian Instruments to be repaired.

With the interior now stripped and the floor panels removed, the entire bottom is now revealed for inspection.  The bottom itself, is made of 1/2 " plywood and appears to be very sound, I could not find any soft spots.... very nice.  However, the most serious issue I've encountered is now obvious... there is a fair amount of dry rot on one point of the frame stringer supporting the engine, which most definitely needs attention.  Also there is a little more rot toward on the stern most frame which the fuel tank strap bolts to which will also need some minor attention.

After removing the vinyl from the transom deck, lots of rot became apparent along the ends that butt up against the mahogany rails.  This will need attention too.  The rot has spread down into a small portion of the transom which will also need some attention.  It appears somebody tried to repair this in the past as there is a spot filled in.  It appears to me to be a design flaw, or perhaps when the vinyl was last replaced it wasn't sealed up properly... water has seeped in-between this joint causing the rot occur. The entire transom deck will need to be  replaced, the transom patched, and possibly will need to replace some of the transom deck framing too... will know for sure after I've removed the deck. 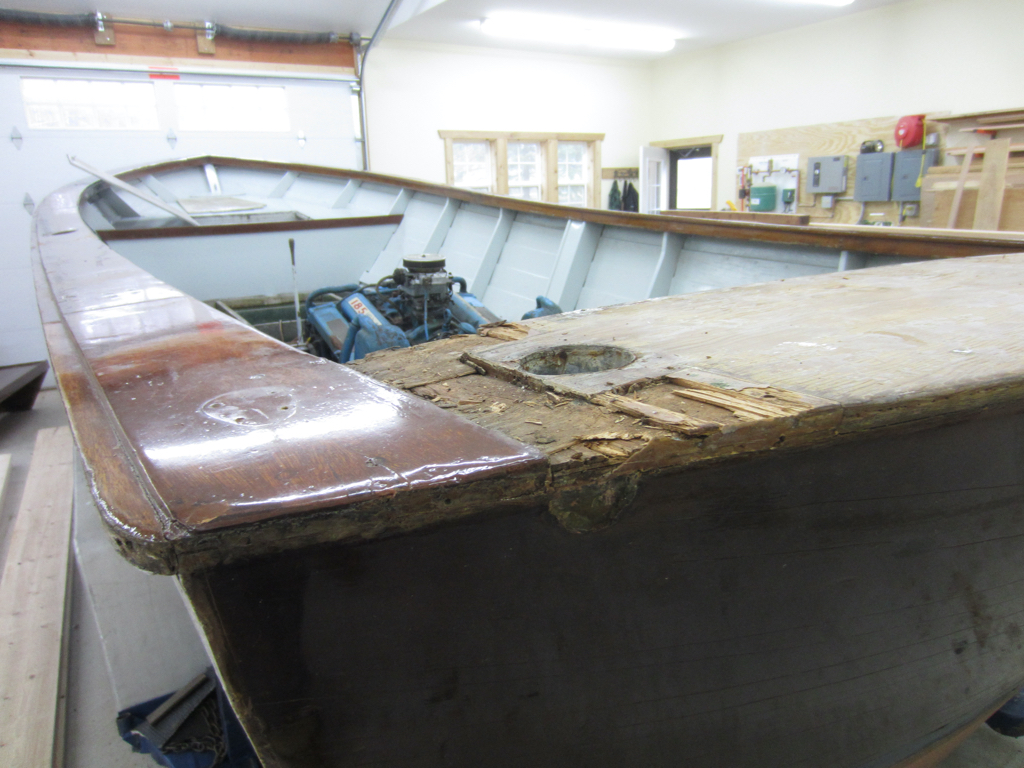 I found the console to be in fair shape, there is rot along the bottom edges where in bolts to the floor that will need to be repaired.  The veneer has splintered away along the edges in some places, and there are numerous holes that have been patched, which detract from its appearance.

The engine cover seems to be in fair shape too.

Inspection under the bow hatch revealed two repairs to the planking.  One repair to the sheer plank on the starboard side appears to be very minor and done with a filling material of some type.  One the lower planks of the port side there appears to be a large repair done that looks to be very sound.

Some of the floor panels were in rough shape and will need replacing and others were fine.  When recovered with new nautilux it ought to look great.

Overall the boat appears to be in pretty good shape, it's in need of a new transom deck, and a little bit of rot repair.  A final bit of inspection work is needed after I complete stripping off the bottom coat.  That's going have to wait for another week or so until I get a boat gantry set up in the shop to enable me to lift the boat off its trailer and onto boat jacks.